The projects listed below are those that are initiated and managed by the Woodlands Office. On any given year there are many other funded research projects that occur on UNH Woodland properties.

An invasive insect called the Emerald Ash Borer (EAB) has begun to negatively impact ash trees in our state. There is a good possibility that, unchecked, EAB will kill the majority of ash trees in NH. To address this, we have established an ash reserve over multiple properties. In the reserve, we inject a sample of trees with a systemic pesticide to keep them alive. We also remove other trees around these to make them more vigorous and allow space for young ash trees to establish and grow. Ongoing research will look at the survival rates of these trees as well as the relative success of regeneration. We hope this reserve will help so we have ash in the future.

CFI plots are permanent sample points that are re-inventoried on a set cycle to gather forest growth data and other information about forests.

Starting in 2006 a permanent CFI grid including over 1000 individual sample points was installed on 18 of  the 23 UNH Woodland properties; these properties are mostly those clustered around the UNH Durham campus. Each plot records baseline information about the trees and other vegetation surrounding the plot. This allows our students and researchers to have current and historical data regarding the outdoor classrooms that they regularly use. This will be the start of a historical record of land use and forest growth on University Woodlands. The first 10 year re-measure at MacDonald Lot occurred in 2016 and has also been done on Kingman Farm (2017), Jones Lot (2018) and Saddleback Mountain (2019). 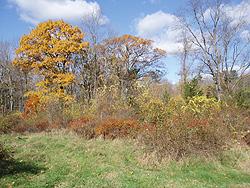 The goal of this project is to create and maintain early successional and old field habitat components on UNH’s Horticulture Farm, Thompson, East and West Foss Farms and beyond. This will be accomplished through a series of mechanical treatments including brush mowing with a brontosaurus mower or similar machine, whole tree harvesting and conventional timber harvest methods. The project will specifically target those species that are associated with old fields, shrubland and early successional growth. Future maintenance of these areas will be accomplished through mowing, clearing with handheld power saws and prescribed fire. This habitat benefits a wide range of wildlife species but is intended to target the New England Cottontail, a threatened species.

Ongoing harvesting by the Thompson School logging class at Horticulture farm increased the size of a large opening at the Horticulture farm. Other recent efforts (2013) towards this project included additional harvesting on East and West Foss Farms, brontosaurus type mowing on Horticulture farm and allowing portions of Kingman Farm to regenerate to a shrubby condition. 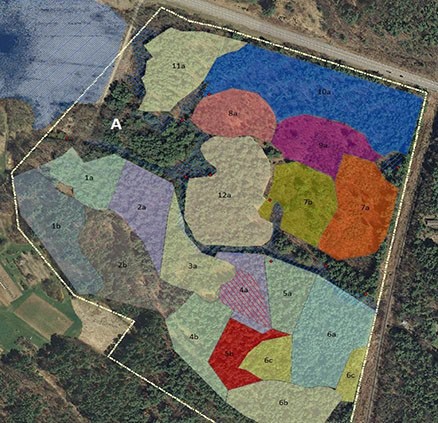 The Quigley Demonstration Area at the Horticulture Farm

This area is being developed to demonstrate how various methods of timber harvesting are implemented as well how each can impact the future development of the stand. At the completion of the project the following treatment blocks will have been implemented:

Harvesting here will be done by the Thompson School harvesting class; the timber that is cut will be sawn by the UNH sawmilling class.

In partnership with the State of NH Forest Health Office a three acre block within the Forestry Demonstration area has been devoted to the insectary. We intend to grow a population of Laricobius beetle, a natural predator of Hemlock Woolly Adelgid, which is a non-native pest of Eastern hemlock trees. If will provide populations of beetles to be distributed throughout the region.

As of Spring 2020, efforts continue to grow adelgid populations to a level that will support the predatory beetle. Supplemental adelgid is periodically added to counteract winter mortality and the site is continually monitored.

In the winter of 2015-2016, student employees of the UNH Woodlands Office helped to clear one acre to establish UNH’s first American Chestnut plantation. 350 seedlings were planted by UNH and local middle school students in the spring of 2016. This planting will be a test for future forest-to-chestnut conversion projects and serve as material for research, educational and outreach purposes.

In the winter of 2012-2013 we implemented 45 one acre experimental blocks in the establishment of the Lovell River experimental forest. Data collected prior to and following the harvest will provide important information for current and future research projects on stand regeneration and crop tree development.

30 each of red oak and white pine crop trees and the trees that are competing with them were measured in anticipation of harvest in the winter of 2016-2017. One of five treatments will be randomly applied and the crop trees and competitors will be monitored over time to, among other things, assess growth.

In 2019 during a commercial harvest, 30 additional red oak crop trees were added as a replicate to the study at Mendums Pond.

In the spring of 2015 we established a glossy buckthorn “orchard” at Kingman Farm.  Buckthorn seed was gathered from local woodlots and planted into a prepared field at Kingman Farm where it will be monitored and tended in different configurations until 2021.

As of Spring 2020 the final experiments are underway and we hope to have results by Spring 2021.