A Goodbye, a Surprise Hello and an Unexpected Honor 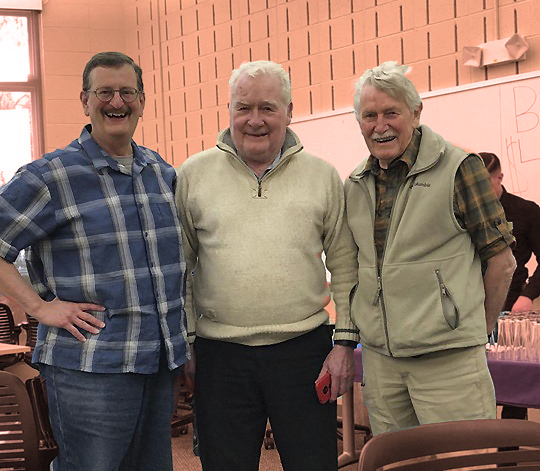 In May, botanical sciences professor Alan (Al) Baker retired after 47 years at UNH. To celebrate a career that began when UNH in-state tuition cost less than $1,100 and an apple was only something you ate, the department of biological sciences threw Baker a retirement party, which included a surprise guest: his first graduate student, Peter Siver. Siver, who came to UNH in 1974, is now a professor at Connecticut College and a recognized leader in the fields of limnology and phycology.

The celebration was not only a chance for a teacher and a former student to see each other in person after many years, it was also the perfect moment for Siver to formally let Baker know that he’s named a new fossil species that he recently discovered for him: Mallomonas bakeri.

“It was an honor, and certainly fitting, to be able to name a new organism after Al Baker,” says Siver. “It was also fitting since his knowledge of freshwater algae surpasses most other scientists worldwide. I guess I was lucky that the scientific name was accepted, and the paper published, in time for his retirement party. I wanted to be able to make the presentation in person and thank him for helping to instill in me a similar lifelong passion in the study of freshwaters.”

Baker and Siver’s relationship has its roots at SUNY Binghamton, where they both studied separately under phycologist George Schumacher. At Schumacher’s suggestion, Baker offered Siver a summer job while he was still an undergraduate working with him at Northern States Power company in Minnesota, where Baker was also finishing up graduate work. Together, they measured the productivity of plankton upstream and downstream from the company’s new Prairie Island Nuclear Power Plant on the Mississippi River and identified the plankton species present.

Says Siver, “I could go on talking about all of those long days doing research on the Mississippi River, but that will just have to wait!”

It was that experience that led Siver to UNH and Baker for his graduate work, fossilizing the indelible role each man would play in the other’s life.

Reflecting on nearly five decades of work, Baker doesn’t miss a beat when asked what he considers his greatest achievement. “Getting the job,” he jokes. He mentions that UNH hired him before he’d completed his dissertation but not without an ultimatum: Finish by the end of your first year or you’re out. (Spoiler alert: Baker finished.)

But his real source of pride, he says, is an online image-based key of algae, cyanobacteria and other aquatic objects he’s been working on since 2010 with professor Jim Haney.

“Jim works with the animal side of plankton — zooplankton — and I work with the plant side, phytoplankton, the algae, and we put together an online key that’s been very popular. It’s had a couple million users, students from around the world, so that’s probably what I’m most proud of,” says Baker.

Baker and Haney are also founding members of the New Hampshire Lakes Lay Monitoring Program, which is celebrating its 40th anniversary this summer.

Baker plans to continue his work on the key, adding information to accompany the extensive photo library.

“What the organisms do, what’s their ecology, what’s their physiology — the things that students really want to know,” he says. “I’ll find a corner somewhere to continue working.”

Of course, he’ll need to add one of Siver’s newest finds, M. bakeri.

Aside from that work, he’s looking forward to spending time at his summer home in the Adirondacks and traveling with his son.

“Well it’s been a good run. That’s a good way to summarize it,” he says, leaning back in his desk chair surrounded by the detritus of a 47-year-long career. “I couldn’t have picked a better job.”