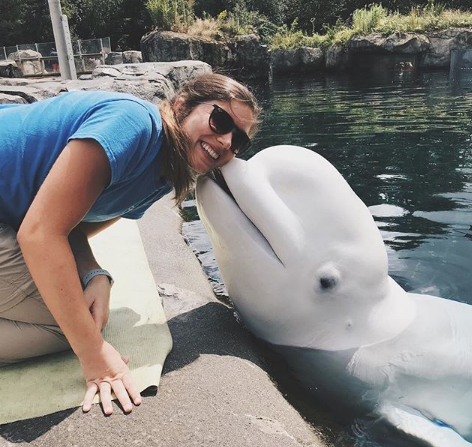 Bosworth sought assistance from the St. Martin Career Exploration Office during the application process for the highly competitive internship, which the pre-veterinary student says taught her that “really hard work is worth it if you love what you’re doing.” Career advisor Melissa Janetos helped her organize her volunteer experiences, relevant UNH coursework and campus leadership and involvement in a way that concisely represented her passion for animal care.

Students from all over the country apply for internships at Mystic Aquarium and very few are accepted. The world-class institution has received the prestigious Humane Certified Seal for Animal Welfare and is renowned for its marine and deep-sea research.

COLSA: Why did you want to spend your summer interning at Mystic Aquarium?

Lindsay Bosworth: I am a pre-veterinary student and potentially want to work with wildlife and conservation. I heard so many amazing things about the aquarium and was specifically interested in their Animal Rescue Clinic. The department works to rescue and rehabilitate injured or stranded marine mammals and sea turtles and release them back in to the wild.

COLSA: What were your responsibilities?

Bosworth: My basic responsibilities as an intern in the clinic were feeding the animals, providing treatments and medication, and assisting in veterinary care and general husbandry. This included a wide-variety of feeding methods for young animals that do not know how to eat or for animals that are not physically able to eat on their own.

I would also ensure the animals in the clinic received the correct medication, perform treatments such as nebulization and wound care, and prepare animals for physical exams, blood work, or treatments such as IV fluids or medications. I also had rotations in necropsy, stranding responses, and releases. 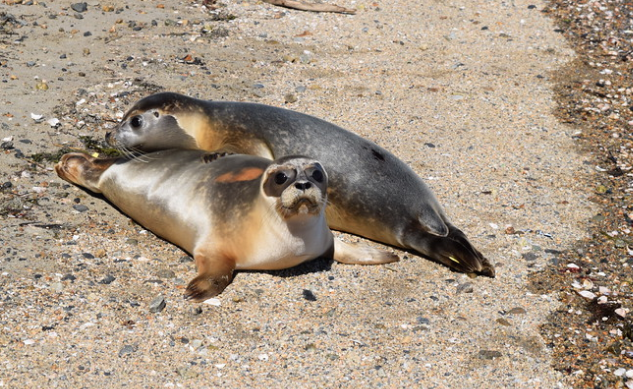 Bosworth: A typical day in the clinic really depends on the time of the year. In the beginning of the summer during harbor seal pup season, an intern’s shifts are either 6 a.m. to 3 p.m. or 2 p.m. to 11 p.m, because the pups need extra care. When the pups come in at only a few weeks old, they still need to be tube fed which consists of six tube feeds a day.

A few days a week, the seals get physical exams from the veterinarians so on an exam day we would work through those and then tube feed. After feeding, we monitor the animals to see how they are doing and clean. At the next tube feed, the animals get their medications.

Twice a day we would have “fish school” where we would teach the seals pups how to swim and would expose them to fish, which they will eventually start to eat on their own in the next few weeks.

Toward the end of summer, interns typically work 8 a.m. to 5 p.m. The young seals now know how to eat fish on their own, and we spend a lot of the day prepping the feeds and making sure they are eating well and gaining weight, which is extremely important for seal pups. The rest of the day is spent managing the clinic, which includes cleaning and monitoring the clinic as well giving treatments. Some of the more typical treatments are eye and ear meds, wound care, nebulization, or fluid treatments and IV antibiotics.

We also always have to be prepared for the unexpected to pop up, such as stranding calls, necropsy classes, or critical animal cases.

COLSA: What is the most interesting thing you learned?

Bosworth: I think the most interesting thing I learned this summer was the biosecurity and protocols when working with wild animals. Always having dealt with domesticated animals or those in agriculture that are acclimated to humans, handling wild animals that could sometimes be aggressive was a little more challenging. It was also interesting to learn about all of the bio safety hazards of diseases that came in and learning how to prevent the spread of disease by carrying out quarantine practices.

COLSA: What was your favorite part of the job?

Bosworth: How much I learned every single day — whether it was from the actual job itself, the other students I work with, or the veterinarians and other staff members. There was always something new to learn and new experiences to gain whether it was about the animals, my career path, or the field in general.

I have learned so much about marine mammals and seals in particular that I would have never known if I had not been working at the aquarium. It was also great to work so closely with veterinarians who have had a career path that aligns with my own plans and be surrounded by people who care so much about what they do every day.

COLSA: Have you learned anything about yourself this summer?

Bosworth: I have learned that really hard work is worth it if you love what you are doing.  We had to work many long hours and stressful days, but in the end it was so rewarding. I feel like I learned a lot about hard work and dedication and about why I want to be a veterinarian even though it is a difficult and time-consuming career.

COLSA: What do you miss the most now that the internship has ended?

Bosworth: I miss the people I worked with the most. It was amazing to be around so many incredible students from different backgrounds who all had very similar passions. I developed friendships and connections with my fellow interns and staff members that I know will shape my career choices in the future.

COLSA: Why do you think interning before you graduate is important?

Bosworth: Interning before you graduate is so important because it gives you a real sense of what a career would be like in your field. It’s an experience you can’t get in the classroom. You also get to make great connections with people in your field who can help you later on.

COLSA: The Aquarium’s internships are highly competitive. What advice do you have for a student who is applying for an internship and facing a lot of competition?

Bosworth: The biggest recommendation I can give to any student is to stay involved. I would never be where I am today without the many connections from involvement at UNH. It is so important to network and meet people who share your similar interests.

In terms of the application process, COLSA’s St. Martin Career Exploration Office was the most helpful resource I could have asked for. I barely had a resumé and had so many questions before starting applications for internships. I owe a lot of my success in getting this internship to them.

COLSA: What is your dream job or ultimate goal after you graduate?

Bosworth: After I graduate, I want to go on to veterinary school. I’m not sure what my dream job is, but I’m considering becoming a wildlife veterinarian or going into wildlife conservation medicine or neuroscience and behavioral research.

Wherever I land professionally, I know the experiences from this internship will be with me for a long time.