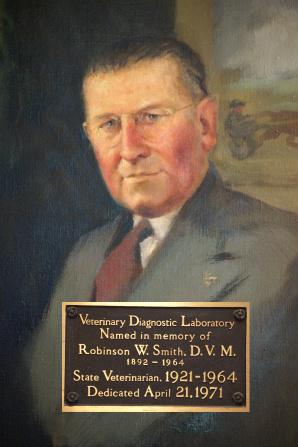 The New Hampshire Veterinary Diagnostic Laboratory was established via an act of the legislature in 1969 to assist the NH Commissioner of Agriculture and State Veterinarian in their efforts to monitor and control important animal diseases and to contribute to the academic, research and outreach missions of the University

The original proposal and founding legislation from which the New Hampshire Veterinary Diagnostic Laboratory (NHVDL) evolved, defined the primary mission of the lab as a resource for the early detection of animal diseases which present a significant threat to animal or human health. The New Hampshire Veterinary Medical Association (NHVMA) was the primary proponent of the lab and was largely responsible for gaining legislative support and for aligning the New Hampshire Department of Agriculture and the University as cooperative entities relative to funding and supervision of NHVDL activities.

The lab was dedicated in 1971 in the memory of the late Dr. Robinson Smith who, as lifelong resident of NH, made numerous contributions to the veterinary profession and NH agriculture.

Upon graduating from the Chicago Veterinary College in 1915, Dr. Smith carried on a well established veterinary practice in Laconia, NH. In 1920 he was employed by the state and federal departments of agriculture, Bureau of Markets, as agent in marketing for the State of New Hampshire. With the creation of the division of Animal Industry in the Department of Agriculture in 1921, the late commissioner Andrew Felker appointed Dr. Smith to fill the new position of State Veterinarian. Following the death of Commissioner Felker in 1946, Dr. Smith also served as acting commissioner until Perley Fitts was appointed in 1947.

Under the leadership of Dr. Smith in the program to eradicate Bovine Tuberculosis, in 1929 New Hampshire became the 9th accredited State in the United States. He was also a leader in the movement to eradicate Brucellosis, and under his direction New Hampshire became the first in the nation to be classified as Brucellosis-free by the US Department of Agriculture and was honored at a ceremony in Concord on April 25, 1960. To this day, NH maintains its Brucellosis free status and livestock from around NH are tested here at the diagnostic lab for routine surveillance.

Dr. Smith visited nearly every state in the country, describing ways to eliminated Brucellosis and was recognized as a national authority on the subject. He authored several articles on Brucellosis and was affiliated with the New England Academy of Science. He formerly headed the US Livestock Sanitary Association and had served as chairman of its National Brucellosis Committee. Dr. Smith also organized and was a past president of the NH Veterinary Medical Association.