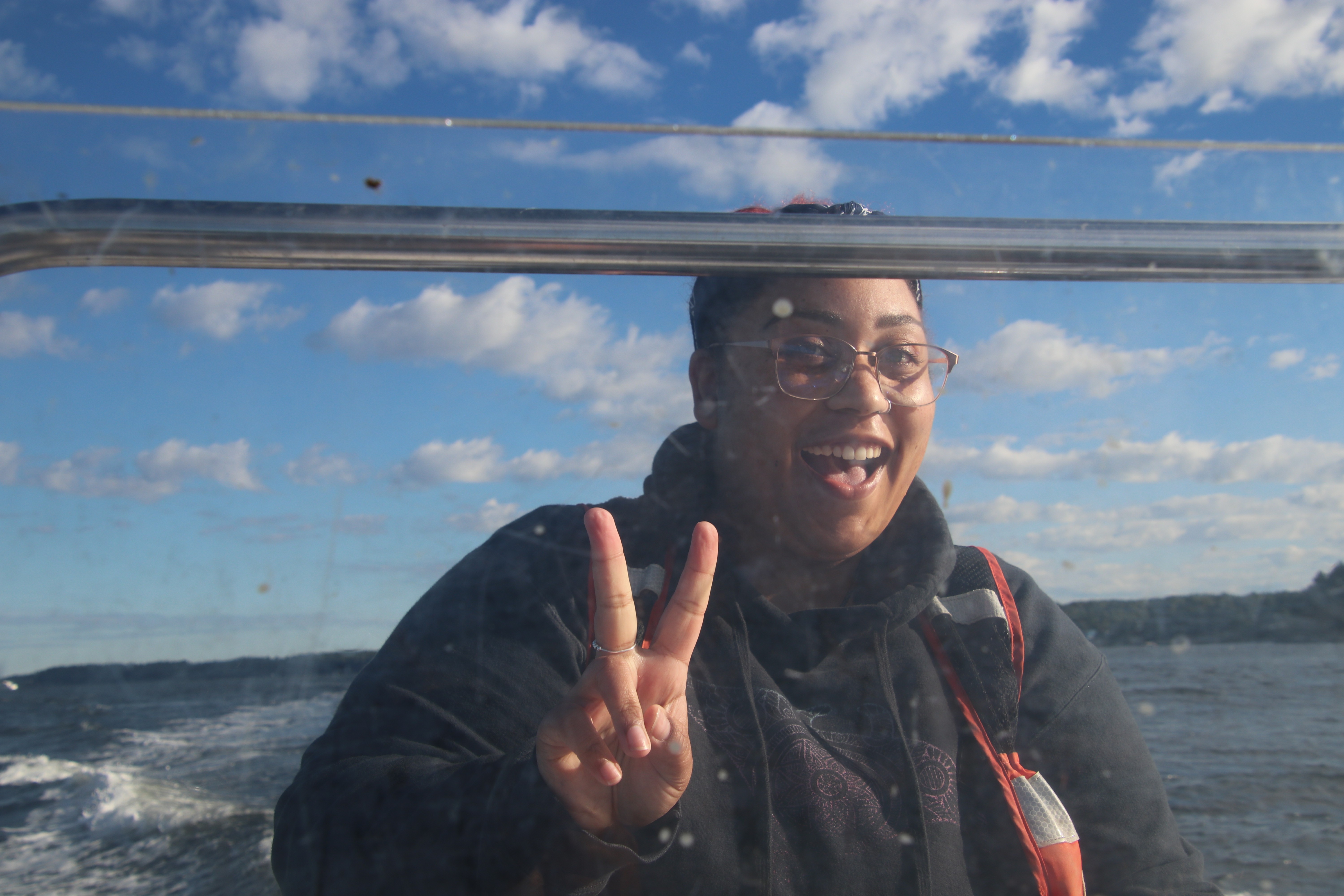 Taja Sims-Harper is a doctoral student in the marine biology Ph.D. program. She conducts her research on microplastics in oysters and other marine life in Great Bay in the lab of Bonnie Brown, professor of ecological genetics and the chair of the department of biological sciences. Taja earned her bachelor’s degree in marine science from the University of Maine.

Taja Sims-Harper: I am working in Great Bay, and I’m looking into getting a baseline data set of microplastics in marine life.

I’m looking at all crabs in Great Bay, fish species and oysters. I am trying to focus mainly on oysters because that’s what my passion is and what I like to do. [However] I wanted to broaden my work to include multiple animals and see if it’s effecting different species, so I added in the crabs and fish.

Mainly, I see if there are microplastics in oysters, especially on farms. I want to see if plastics are affecting oyster biology and if they’re getting into the oysters, especially the ones that are in the farms, and then in turn being put into humans. It’s hard because I don’t want to out the farms and say that this is happening, so I’m working with them to try and let them know this isn’t to stop their business. There’s a problem, and I’m trying to find a solution for everyone.

My work also includes mapping the bay using GIS and other mapping programs to find out where microplastics may be moving and settling — are they near oyster farms? Are they staying in the bay long? Do they impacted by the ebb and flow of the tide?

COLSA: What are microplastics?

Taja: Microplastics are any sort of plastic material that’s less than .5mm — you have to look at it through a microscope. It comes from plastic water bottles, or anything plastic, and over time they break down so small that now it’s microscopic, and oysters who filter feed plankton which are super small too, are now ingesting microplastics. To what rate they are doing that, we don’t know, but that’s what I’m looking into.

COLSA: What is the problem you are trying to solve?

Taja: We know that microplastics is a huge issue globally just because plastic is mass-produced: everything in grocery stores is wrapped in plastic, anything we buy off Amazon usually is in some sort of plastic packaging. Those things get thrown out, and they end up in landfills and in the ocean, and eventually that breaks down. It’s really, I think, important for people to start trying to source companies that use compostable packaging because it doesn’t affect the environment as much.

COLSA: Why is your work important?

Taja: I think it is super important because the more that plastics get into different species, especially like fish and oysters and things that we consume, it’s going to start affecting our health, and at the same time it’s starting to affect the health of these animals. It might start to affect these species’ ability to reproduce, and then it’ll start effecting the environments and how the systems work.

COLSA: What drives you?

Taja: I wasn’t always interested in shellfish. In my undergrad, I was obsessed with manta rays. But my mentor was an ecologist, and he worked with oyster farmers, and one summer I worked with him in Maine. That summer changed me. We were looking at blister worms in oysters because the worms would burrow into oyster shells and make mud pockets, which made the oyster unsellable; it was ruining the business of these farmers. My professor would take me to the farms, meet with the farmers and talk about what was going on, and the farmers let us take some samples and they’d feed us eat oysters.

We’d go out every two weeks, and I think meeting with these oyster farmers and talking to them and being able to understand their problem and then finding a solution or trying to find a solution was where I started to think this is what I want to do. I have always wanted to help people. 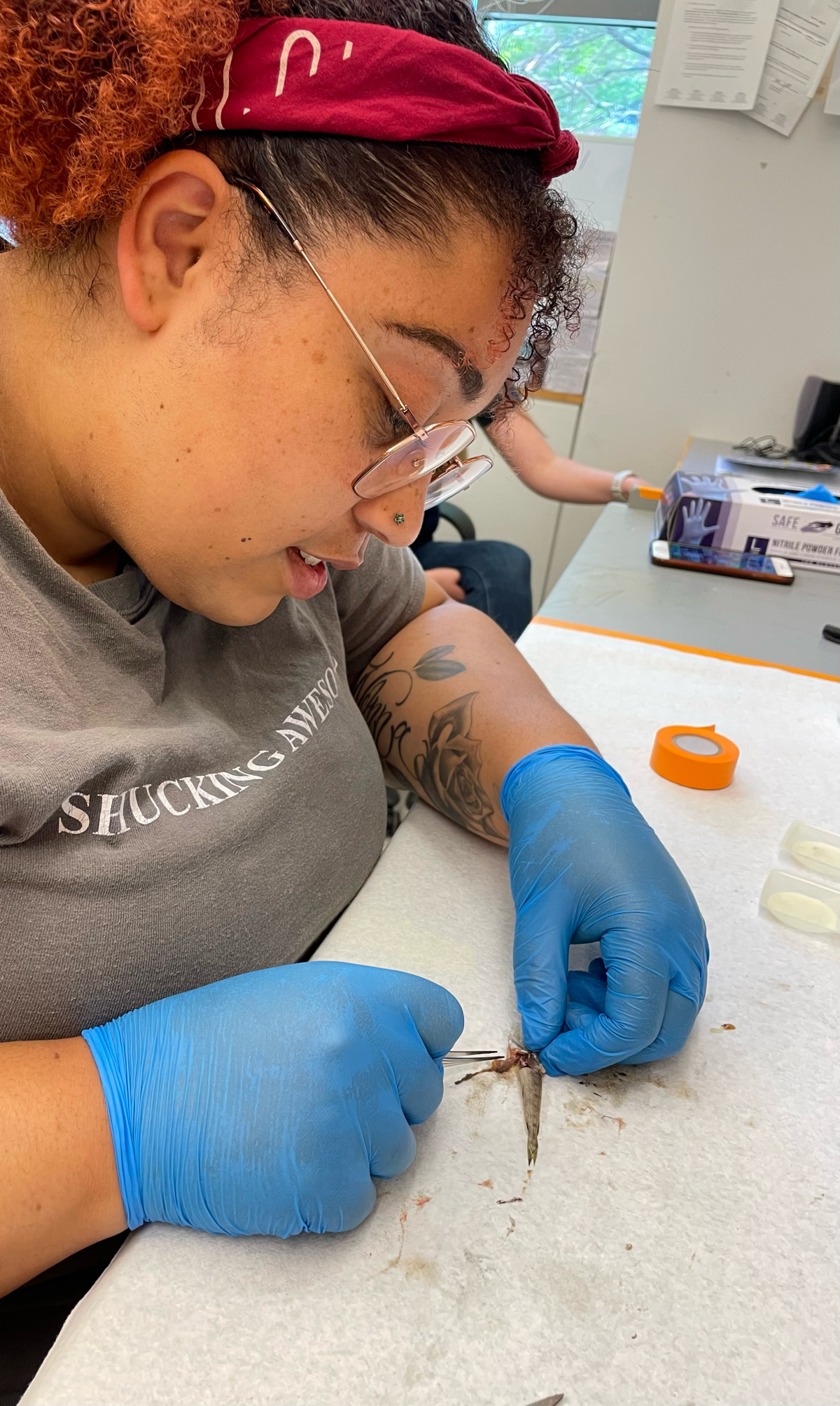 That summer I also realized I love oyster farming, and after I graduated [from the University of Maine], I got the internship at the nature conservancy looking at oyster conservation and restoration. I was out at the mounds almost every day, digging up shells and putting shells in. It was very physical, and I was really into it. I think it’d be awesome to have my own farm and at the same time be a scientist and working to solve problems, too.

COLSA: What are you going to do when you get your PhD?

Taja: I would love to be able to be an oyster farmer, and I’m really into kelp farming and the multitrophic system — everything building off each other. At the same time, I’m really enjoying being able to teach and help students, and I used to say I probably wouldn’t teach until I was older and past my research stage, but I think that after my doctorate, I want to get into teaching. Probably not in a classroom because I enjoy being out more and doing one-on-one, small group type teaching.