Published research, an industry in peril 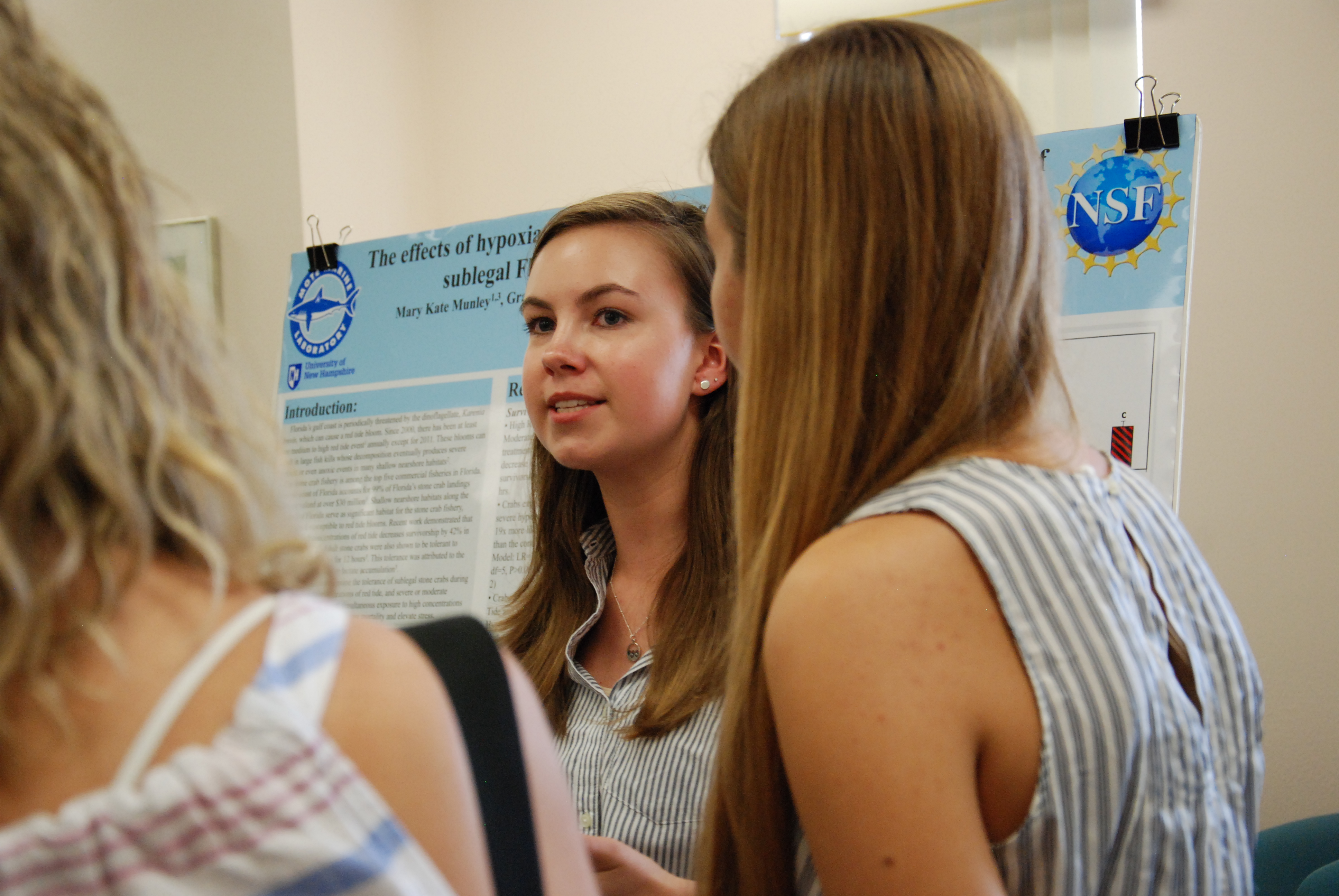 Mary Kate Munley is a marine, estuarine and freshwater biology major who was one of the authors of a recently published study about the impact of “red tides” on Florida’s Gulf Coast on stone crabs.

This is not the first time Mary Kate’s achievements have been talked about in COLSA's Spotlights: the driven senior, who was selected to participated in the summer 2020 Fulbright-MITACS Globalink program (which was unfortunately cancelled due to the pandemic), has made it a point during her time at UNH to seize opportunities that have come her way, including working in the labs of Prof. Larry Harris and Prof. Elizabeth Fairchild. She’s also interned at the Sea Turtle Conservation and Research Program at Mote Marine Laboratory in Sarasota, Florida.

Mary Kate Munley: Almost annually Florida's Gulf coast experiences "Red Tides" which are caused by a high concentration of a phytoplankton, Karenia brevis. The toxins produced during these blooms in high concentrations can cause mass mortality events, also known as fish kills. These toxins occur in nearshore and coastal habitats where the Florida stone crab lives.

In addition to the exposure to toxins, crabs in these areas are exposed to low oxygen concentrations in the water. The decaying fish from the mass mortality events further intensify the low oxygen caused by warming water temperatures. Our research determined the effect of prolonged exposure the toxins and low oxygen levels combined on stone crabs through laboratory experiments.

COLSA: Why is this research important? In other words, why should people outside the scientific or academic community care?

Mary Kate: The stone crab fishery is valued at ~$25-30 million a year in the state of Florida. The stone crab fishery is a declaw and return fishery, meaning that the claws of adult stone crabs are removed and the crab is released back into the wild to regrow its claws. This is done with the hope that the crab will regrow its claws to re-enter the fishery in future years so its claws can be harvested again. However, this method can have negative impacts such as mortality and reduced reproductive success in crabs.

Florida red tide blooms primarily occur in nearshore and coastal areas, which also are the habitats of juvenile and sublegal stone crabs, which represent the future stock of the fishery.  In addition, since

2011 the southwest coast of Florida has seen approximately a 60% decrease in the region’s annual harvest. This indicates that prolonged red tide blooms may be impacting the stone crab population.

COLSA: What are the most interesting research findings from your work so far?

This indicated that the tolerance of sublegal stone crabs to these conditions is dependent on the severity and duration. On a more positive note, there was a significant difference in mortality and stress between moderate hypoxia and severe hypoxia indicating that future mitigation efforts to reduce the severity of the blooms will benefit these populations.

COLSA: Where does this fit into a larger area of research?

Mary Kate: This research provides further insight into the detrimental effects of Karenia brevis blooms on sublegal stone crabs which is the future stock for the lucrative stone crab fishery.

COLSA: How did graduate and undergraduate students contribute to your research?

Mary Kate: My research advisor was Dr. Philip Gravinese who is currently at Florida Southern College